What Can You Do With a Polarity Therapy Major?

People with a polarity therapy degree often go into the following careers:

How Much Do Polarity Therapy Majors Make?

Polarity Therapy majors often go into careers with median salaries of $85,600. This median refers to all degree levels, so you may expect those with a more advanced degree to make more while those with less advanced degrees will typically make less.

In 2020-2021, 4 schools offered a polarity therapy program of some type. The following table lists the number of programs by degree level, along with how many schools offered online courses in the field.

Is a Degree in Polarity Therapy Worth It?

The median salary for a polarity therapy grad is $85,600 per year. This is based on the weighted average of the most common careers associated with the major. 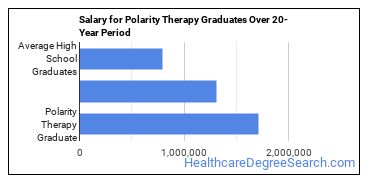 You may also be interested in one of the following majors related to polarity therapy.