24,760 people in the state and 346,380 in the nation are employed in jobs related to speech-language pathology. 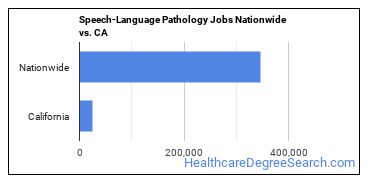 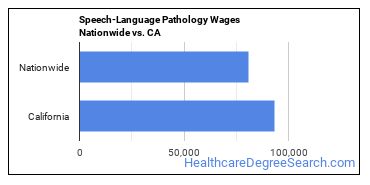 There are 8 colleges in California that offer speech-language pathology degrees. Learn about the most popular 8 below:

The average student takes 4.91 years to complete their degree at CSUSM. The 4.20% student loan default rate is lower than average. This public college charges it's students an average net price of $13,399.

In their early career, CSULB grads earn an average salary of $36,500. Students who attend this public school pay an average net price of $9,622. The full-time teacher rate is 48%.

Grads earn an average early-career salary of $72,000 after earning their degree at this institution. The student loan default rate of 1.30% is a good sign that graduates can afford their loan payments. The full-time teacher rate is 93%.

This school boasts a lower than average student loan default rate of 2.00%. The student to faculty ratio is 28 to 1. 87% of students get financical aid.

Seeking financial aid? At this school, 99% of students receive it. The student loan default rate is 1.60% which is lower than average. 14 to 1 is the student to faculty ratio.

An average student at Cal Baptist will pay a net price of $24,707. Of all the teachers who work at the school, 44% are considered full time. 98% of students are awarded financial aid at this school.

Graduates earn an average $38,200 after graduation. The student to faculty ratio is 25 to 1. Of all the teachers who work at the school, 56% are considered full time.

Some of the careers speech-language pathology majors go into include:

Below are some popular majors in the state that are similar to speech-language pathology.